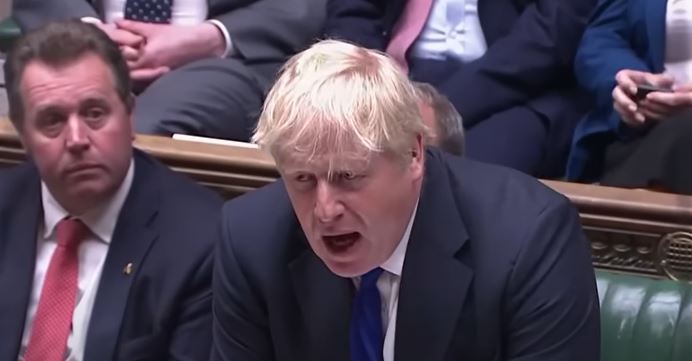 Anyone who was spread-betting on the number of ministers to resign from the British Cabinet yesterday would have been well outside their normal risk limits pretty quickly; all previous records had been soundly broken by the market close, and new ones continued to roll in well into the evening.  Today, Boris Johnson is due to resign after exhibiting the kind of tenacity in the face of unpopularity that’s usually associated with European investment banking CEOs.

It’s all fun and games until somebody loses an eye, as they say.  Along with Johnson, the exits have included Chancellor Rishi Sunak and John Glen, the popular and well-regarded minister with responsibility for the City of London.  That’s a large vacuum at the head of government, and a lack of clarity on what's going to happen to quite a lot of important legislation.

For example, the plan to make London into a global crypto hub is now up in the air.  Creating the right regulatory environment for a new financial market to flourish is a difficult job, requiring energetic political leadership based on an understanding of the issues and commitment to the policy.  Having to start the whole project all over again because of a change at the top is a heavy blow; all the other cities who had been hoping to take the crypto franchise away from the UK have received a big boost.

So that’s another post-Brexit opportunity possibly missed.  And the general atmosphere of civic chaos is hardly likely to encourage any global banks to increase or even maintain their presence in London in the face of competing pressures to staff up in the Euro area. Johnson is reportedly planning to stay in place until the autumn, despite war in Europe and rising inflation. An unscheduled General Election seems likely, with no real sense of who might be leading one of the major parties (and no certainty about the other, given the overhanging risk that Opposition leader Keir Starmer might have to resign over a COVID-related fine).

About the only bright spot for bankers might be that this sort of political uncertainty is usually associated with a sickening lurch downward in the currency (although the pound has so far rallied today).  Which means that for London bankers working at non-UK firms where the bonus pools are set and awards decided in terms of the head office domestic currency, the 2022 compensation round might go a bit further when converted into sterling.  If you’re paid in dollars, you’ve already done pretty well so far this year; a flat bonus on 2021 would be worth 13% more.  Combine that with steadily weakening property prices, and if British bankers are still employed at the end of the year, they might at least be able to cheer themselves up with a nice little holiday cottage in the Cotswolds, or a pied-a-terre by the Thames.

On the other hand, however well-founded the worries about the future, right here and now it has to be admitted that financial sector recruitment is still red hot.  According to the full year results of recruitment firm Robert Walters (as presented by its CEO and founder, Robert Walters), fees are up by 25% and the headhunter headcount is up 7%, with employers in “the hottest areas of the City” raising salaries (on which the recruiters’ commission is calculated) by as much as 30% when they really need new employees.

Things have even reached the point at which the headhunters are getting headhunted.  Robert Walters had an employee on £50,000 who left this year to go to a new job paying £110,000.  Interestingly, though, it’s not the “traditional banking and trading jobs” that have been driving things – which might be expected, as front office hiring is a specialised market which tends to go through smaller consultants who make a lot more than low six figures.  Robert Walters’ bonanza year has been driven by technology and compliance hiring, where the unit sizes are smaller, but the flow of mandates is substantially less cyclical.

More tales from the crazy world of American wirehouse broking.  It’s the literal Wild West this time, where the Oklahoma City branch of Morgan Stanley has dismissed financial advisor Leonard Bernstein after an incident in which his colleague Chris Bayrouth ended up being shot five times.  Mr Bernstein is ninety years old.  Morgan Stanley is seeking to have him barred from the financial services industry, although this might be considered a bit superfluous as he is currently under arrest for attempted murder.  (Bloomberg)

If you prefer to have your social life Monday to Friday, Virtu Financial has a vacancy on its crypto trading desk for someone to work at the weekend.  You’ll need coding abilities (Python, SQL, Java or C++) and to be “a physicalizer; a person who identifies issues and creates solutions without rigid direction or fanfare.” (Greenhouse)

The Church of England has named its coming bond issue “Cranmer Bonds”, after a 16th century Archbishop.  If you’re offered them, it’s historically accurate to make jokes about “best execution” or ask whether there’s a risk that investors will be “burned” – that’s how Thomas Cranmer ended up. (FT)

Is there a “bro culture” in fintech?  A committee of the US Congress thinks that there might be, and has been holding hearings on how to get more investment in diverse companies in the sector (Payments Dive)

Crypto hiring isn’t yet dead! Eric Wragge and Puja Samuel, both from JP Morgan, have gone to business development jobs at the Algorand blockchain and the Digital Currency Group respectively. (Coinbase)

Over 70% of asset management firms saw a significant increase in the number of staff leaving to go to tech firms over the last year, according to a survey from Accenture.  The problem is apparently “cultural inertia” and “fear of failure when it comes to embracing new technologies”, rather than anything as simple as money. (Bloomberg)

JPMorgan has built a deep hedging engine that uses AI to work out how to hedge derivatives books from raw data. They say it's the most exciting research in derivatives and pricing management. (Risk)

Look inward, practice curiosity and lead by example.  That’s the advice from psychology professors on how to be less judgey, if you’ve decided that’s something you want to achieve. (Vox)