Unemployed ex-CEO of Russian bank wants you to hire him 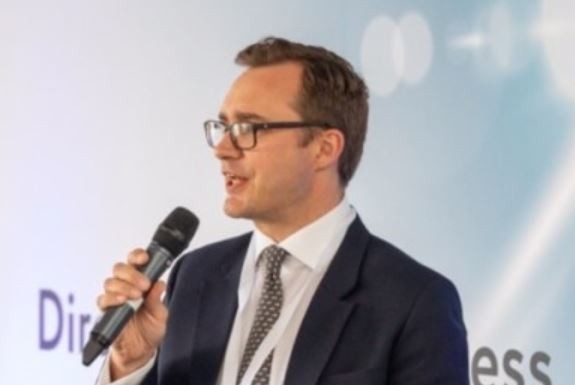 Who will hire Adam Jesney? Having left Sberbank nearly two months ago, Jesney is looking for a new job. His preferred niche is ESG.

Jesney, who was CEO of Sberbank's corporate and investment bank and who worked for RBS and CIBC before joining Sberbank in 2013, has been making his pitch for re-employment on LinkedIn.

This is the combination of experience and verve that Jesney says his new employers will be buying into: 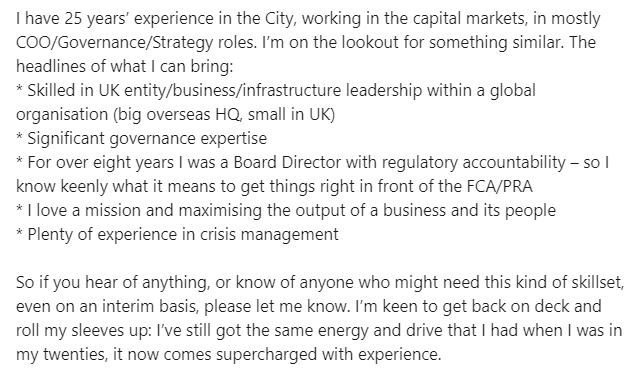 So far, he says he's spoken to at least 50 people regarding his next move. Preferably, he would like this to have an ESG angle. - Jesney says his environmental conscience has been "pricked" by his children; he's started on a sustainability leadership programme at Cambridge University. "I want us to leave the business world and the natural world in a better place than we found it."

He even has some rare ESG experience. Sberbank had an ESG action plan and Jesney says he was in the process of implementing it, but that "frustratingly" it was only partially complete when he left.

Sberbank said in April that it was closing its London office after finding itself "operationally unable to make payments" following sanctions relating to the war in Ukraine. VTB Capital also closed its London office, with the loss of 150 jobs, so Jesney will not be the only person who worked for a Russian bank on the market.

Despite his 25 years of experience in banking, Jesney is clearly not ready to retire. This may have something to do with suspension of trading in Sberbank shares in the UK or the 99% drop in the price of Sberbank shares on the London Stock Exchange since the war in Ukraine broke out. Any bonuses paid in deferred stock listed in London will therefore be worthless.

Sberbank's London office was perhaps best known for a discrimination case involving Svetlana Lokhova, a former saleswoman, who claimed that her boss, Timur Nasardinov, made unwanted sexual advances and that another boss, David Longmuir called her "crazy Miss Cokehead." According to Longmuir's LinkedIn, he is now based in Moscow and "writing."

This was all before Jesney's time. A recently posted review of Sberbank's London operation on Glassdoor described the bank has having, "A great CEO, mature IT, but some bureaucracy." Jesney was a "great CEO who cascades the right values," they elaborated. Another reviewer said working at Sberbank was a "non-stressful work environment with a lot of freedom."

ESG jobs can be reasonably lucrative. Senior climate change specialists in the asset management industry can earn up to £200k according to a recent compensation survey.