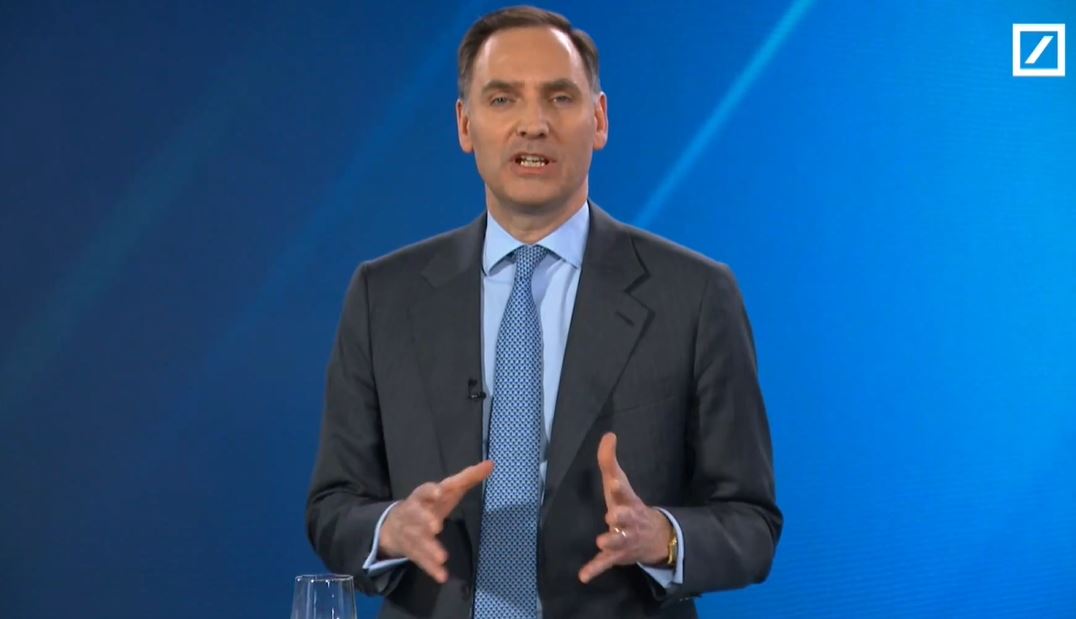 It's investor day at Deutsche Bank, and as at Citigroup's investor day last week, you wouldn't necessarily know that there's a war going on in Europe.

As it continues its "virtuous circle" of cost-cutting and reinvestment, Deutsche Bank is targeting group revenue growth of 4-4.5% in the years to come. Today's presentations reference the strength of the German economy without mentioning higher gas prices, and talk about "normalization" after the pandemic. There's even a slide mentioning Deutsche's "delivery hubs," including Moscow and St. Petersburg, which CEO Christian Sewing said are focused on 'change the bank' rather than 'run the bank' programs.

This doesn't mean that the war is ignored entirely. Deutsche CFO James von Moltke prefaced his presentation today with the observation that it's based on the "assumed operating environment." Inflation may be higher due to "recent events," said Von Moltke, noting that resulting higher interest rates could be good for Deutsche's corporate and retail bank. Most portentously, Von Moltke said: "We have yet again entered a period of heightened uncertainty. This could lead to deviations from our plans.”

War or not, Deutsche has reason to be bullish. After dodging the bullet on Archegos by virtue of its strong risk management systems, DB said today that its exposure to Russia is "contained" and that any loss is "more than digestible." The German loan book is strong, said Sewing; German family-owned companies are highly flexible at adapting supply chains, he added in response to a question from an analyst. The German government knows that cutting off the Russian gas supply is "not an option," Sewing added.

The Russian invasion of Ukraine began on February 22. In January and February 2022, Deutsche said its investment bank made revenues of €2.16bn, an increase on €2.09bn last year. Sewing said the bank had a very good start to the year in fixed income sales and trading. Deutsche's absence from commodities trading, combined with its strength in rates, FX and emerging markets trading, plus its conservative positioning regarding Russia makes it entirely feasible that DB will head its target of €6.7bn of revenues from fixed income trading in 2022, said Sewing.

While Deutsche Bank's fixed income traders are thriving, its investment bankers are not. Revenues in origination, advisory and corporate finance are "absolutely down" this year, Sewing confessed. But fixed income revenues are able to, "compensate and potentially more than compensate," he added.

While Deutsche's executives are talking up the growth, Deutsche's employees are feeling the love. The bank revealed today that 71% of its employees are committed to the bank, up from just 57% in the nadir of 2018. 88% of them now 'embrace the strategy.'

Where Deutsche Bank is hiring in 2022

This isn't to say that Deutsche isn't cutting costs this year. Sewing said today that the bank cut costs by €100m in 2021 by simplifying technology and operations and that it expects another €100m in savings from the same process in 2022.  Jobs are being shunted into low-cost offices (presumably not in Russia), and "corporate title distributions" are being examined (which suggests DB might be rebalancing away from its many, many managing directors).

Conversely, artificial intelligence is an area of focus (and likely hiring): Sewing said DB has 36 AI and machine learning use cases across the bank, both in the front office, for increased operating efficiency and for things like "automated risk protection."

KYC and financial crime are another area of certain recruitment. DB has invested an additional €3bn in controls since 2018, and plans to keep investing this year, said Sewing.

There are also plans to continue investing in fixed income engineering, including the development of "next generation" of trading and analytics tools and the "automation and electronification of flow trading capability across the FIC business."

In the front office of the investment bank, Deutsche plans to focus on "capital light" businesses, including M&A. While most of this year's hiring is likely to be in technology and controls, the bank says this will be "supplemented by select senior hires in the front office."